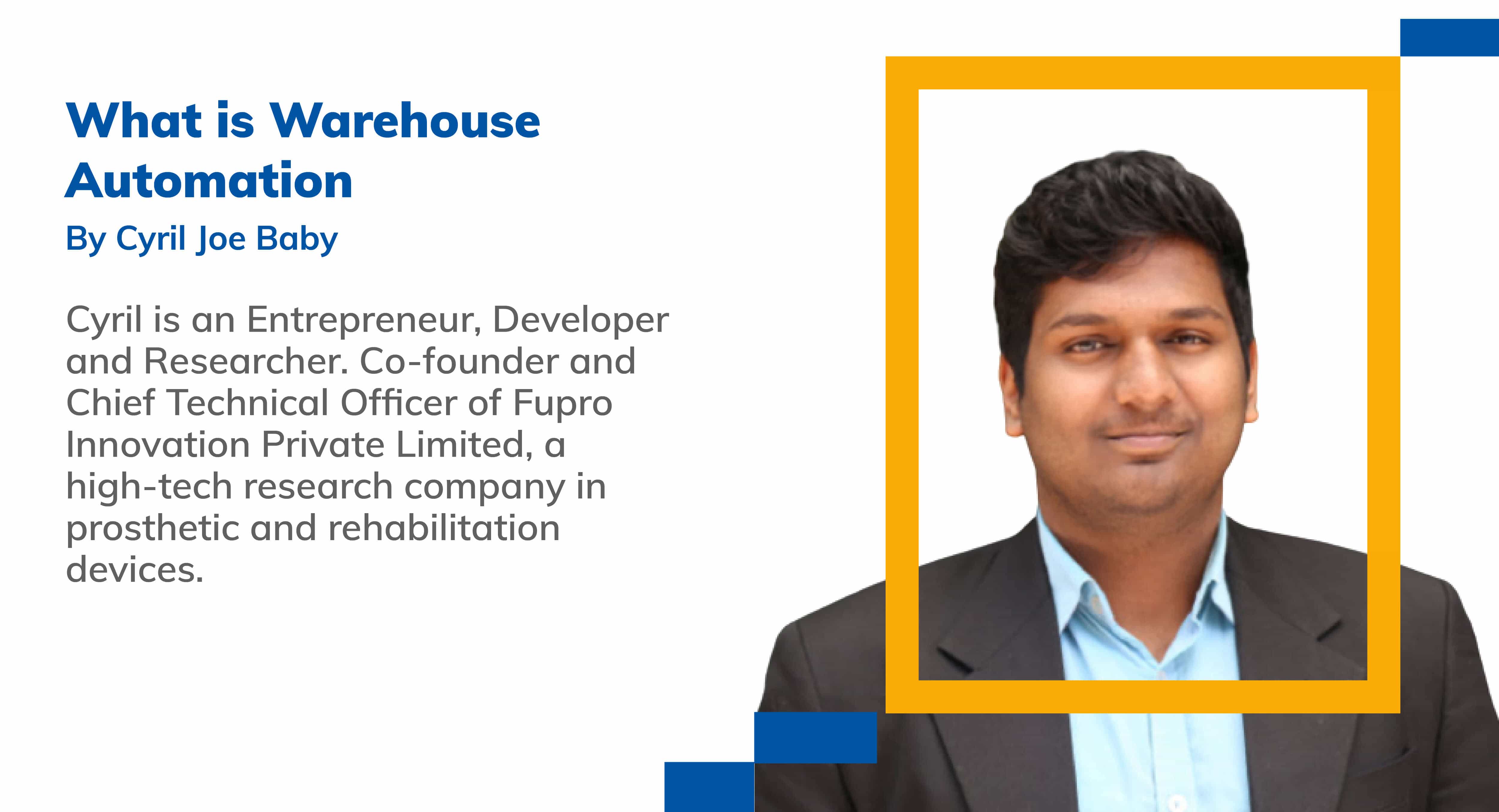 Warehouses play a very vital role in the 21st Century. Today, most of the E-Commerce companies want to ship orders as fast as possible to increase customer satisfaction. Some companies also have guaranteed 1-day delivery commitment but this is only possible when the goods from the warehouse are retrieved and sorted for dispatch very fast. For large warehouses, hiring people for performing such activities is not a good decision, instead now companies are going for Automation. There are various automation solutions for warehouses but there is no solution available, which can individually pick and place orders from warehouse racks to receiving or dispatching counters.

The order picking or order preparation operation is one of a logistic warehouse's processes. It consists in taking and collecting articles in a specified quantity before shipment to satisfy customers' orders. It is a basic warehousing process and has an important influence on supply chain's productivity. This makes order picking one of the most controlled logistic processes. It is one of the warehouse management system functionalities. 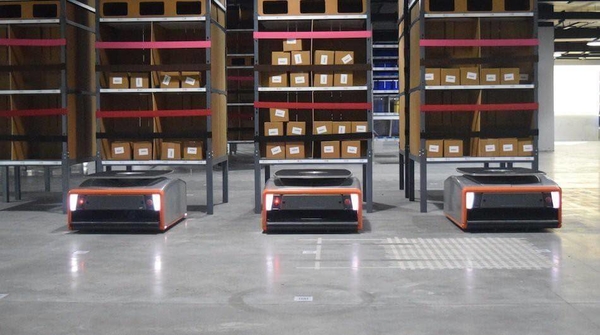 To achieve lower warehousing cost, accurate and faster order fulfilment, higher inventory traceability, intelligent automation systems must be used. One such automated system has been utilized by Grey Orange, a smart butler as shown in the figure above, which can pick-up entire stations with multiple storage units and can move at a relatively high speed. One major disadvantage of this smart butler is that it cannot carry individual units from one place to another without carrying the entire station. This is somewhat inefficient in terms of energy spent to carry the entire station and back in cases where only a few products are required. 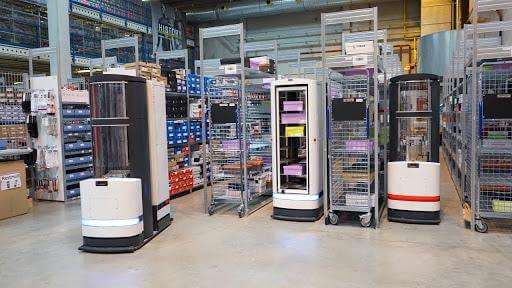 Another example of intelligent automated robots is the Pick-up robot by Magazino. It is a smart bot which picks up the inventory required and places it in the shelves built within it. When its shelves are filled, it goes to the unloading station.

One major drawback of this design is the limited number of shelves which limit the efficiency of the bot. The bot has to unload the inventory at the unloading station at regular intervals of time, therefore this design cannot be used in a large warehouse where there would be dozens of orders to be collected simultaneously. 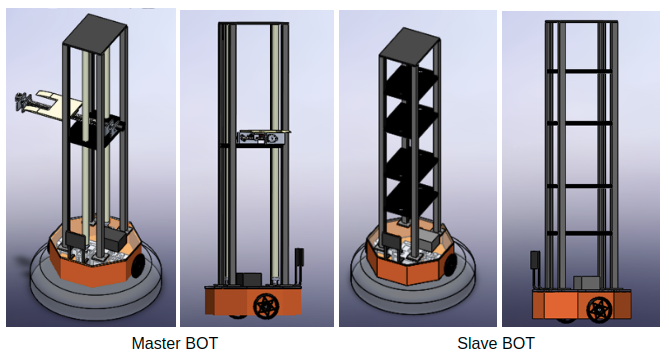 This Master-Slave concept will make the entire order retrieval process faster and efficient. There will be no delay in between collecting huge orders. Both the Master and Slave BOTs work autonomously. There is a mainframe system that obtains the order and retrieves the information about the position of the items in the order. The mainframe passes this information to the Master BOT. 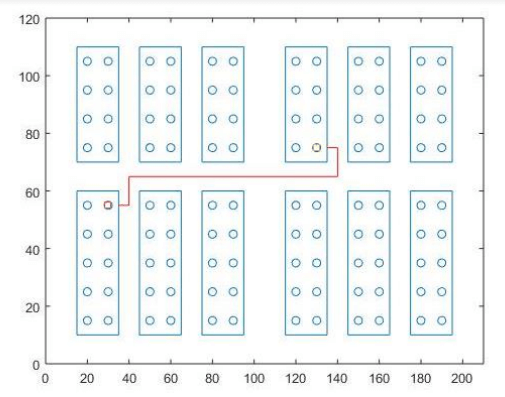 Both the Master BOT and Slave BOT was designed to withstand high loads and move at higher speeds even with load. The movement of the BOTs is facilitated by a differential drive using two high torque Delta servo motors. The servo motors were controlled by a PLC through CAN bus protocol. Both BOTs have an HMI Display to view status and also control them manually. 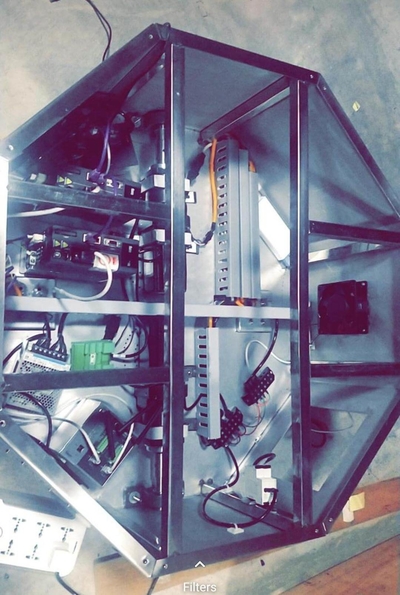 This is the base design of the BOTs. There are multiple components enabling the control of the BOT. A PLC (Programmable Logic Controller) acts as the brain of the BOT and. A HMI Display is used for viewing status of BOT and also for manual control if necessary. The BOT has two Delta ASDA-A2 servo motors and drives for movement.

The mainframe system also has a PLC and a HMI. The order to be collected is fed to the mainframe PLC. The mainframe PLC divides the order to each Master BOT and shares the location of each item to be picked to respective Master BOT. To enable, sharing of such data we have used Wi-Fi modules on the Master BOTs, Slave BOTs and the mainframe. Each Wi-Fi Module is connected to the respective PLC and a set of registers is defined as a shared resource. Any change made in these registers from one PLC will reflect into all the other PLCs through the Wi-Fi module. This mechanism is used by the bots to communicate with each other and also with the mainframe.

Given Below is a Concept Design for the proposed Warehouse system. The Master BOTs take products from the shelves and load on the Slave BOTs and the Slave BOTs load the products in the unloading area once capacity is full. This concept solves delays involved with retrieving huge orders. 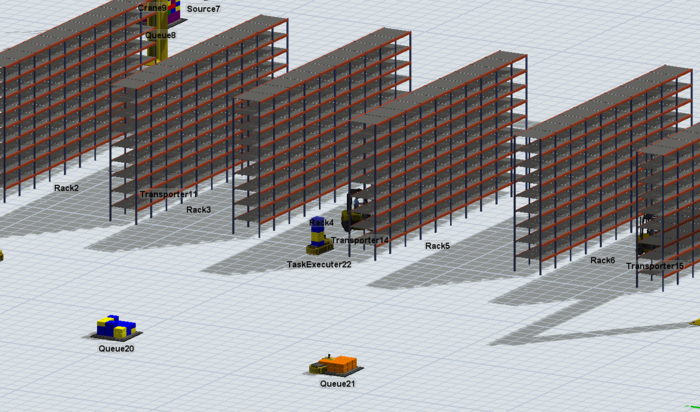 Another main issue in Warehouse Automation is dividing order to multiple Master BOTs. In any warehouse due to the size of the warehouse there will be multiple Master BOTs. Traditionally each Master BOT is assigned a specific region and collects items of the order from that region. The allocation of Master BOT region is done in the beginning only. Once a set of orders arrives, the job is distributed among the master bots based on the region from where it has to be collected. The disadvantage with this approach is that the bot which has fewer items to collect will finish the task earlier and will remain idle. 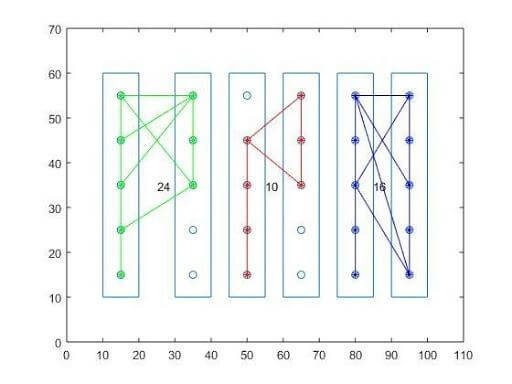 This problem can be solved by dynamically distributing the task between the orders. The Master BOTs do not have a specific region allocated in the beginning. The region for each Master BOT is dynamically allocated once the order to be collected is received. The allocation happens in such a way that all the BOTs have equal workload so that the entire order retrieval process is efficient.

preassigned areas. To Optimize the warehousing solution, we have used Machine Learning

Scenario: A warehouse with 108 products shelved in 12 two sided shelves. 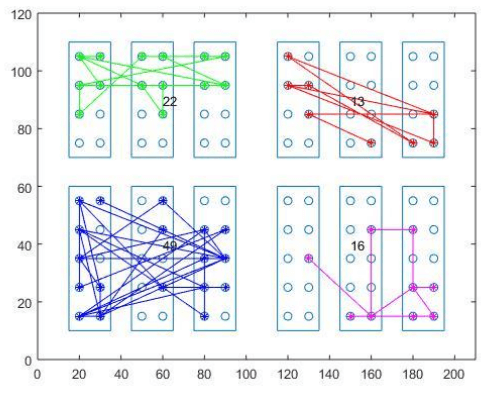 This is how traditionally the order would be picked up by the Master BOTs. Each Master BOT is assigned a quarter in the beginning only and collects items in their respective regions.

Scenario: A warehouse with 30 products shelved in 6 two sided shelves. 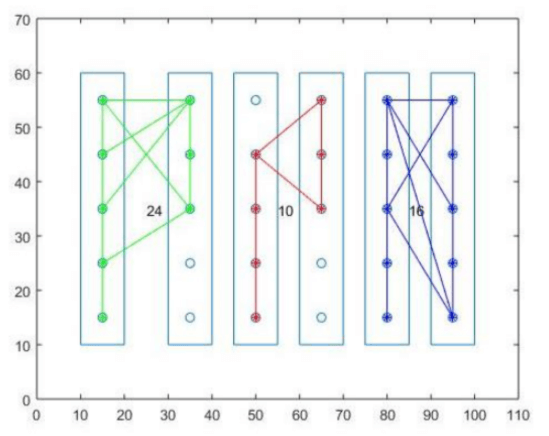 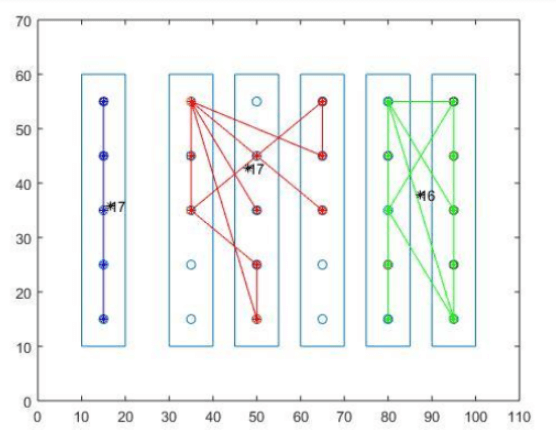 In both the cases the clustering approach to allocate items to pick up to Master BOTs is more efficient than the traditional approach. This concept makes the entire warehouse automation process efficient and convenient. Both the Master-Slave BOT concept (Swarm robotics) and the dynamic allocation of workload between Master BOTs (Clustering - Machine Learning) helps to optimise Warehouse Automation. 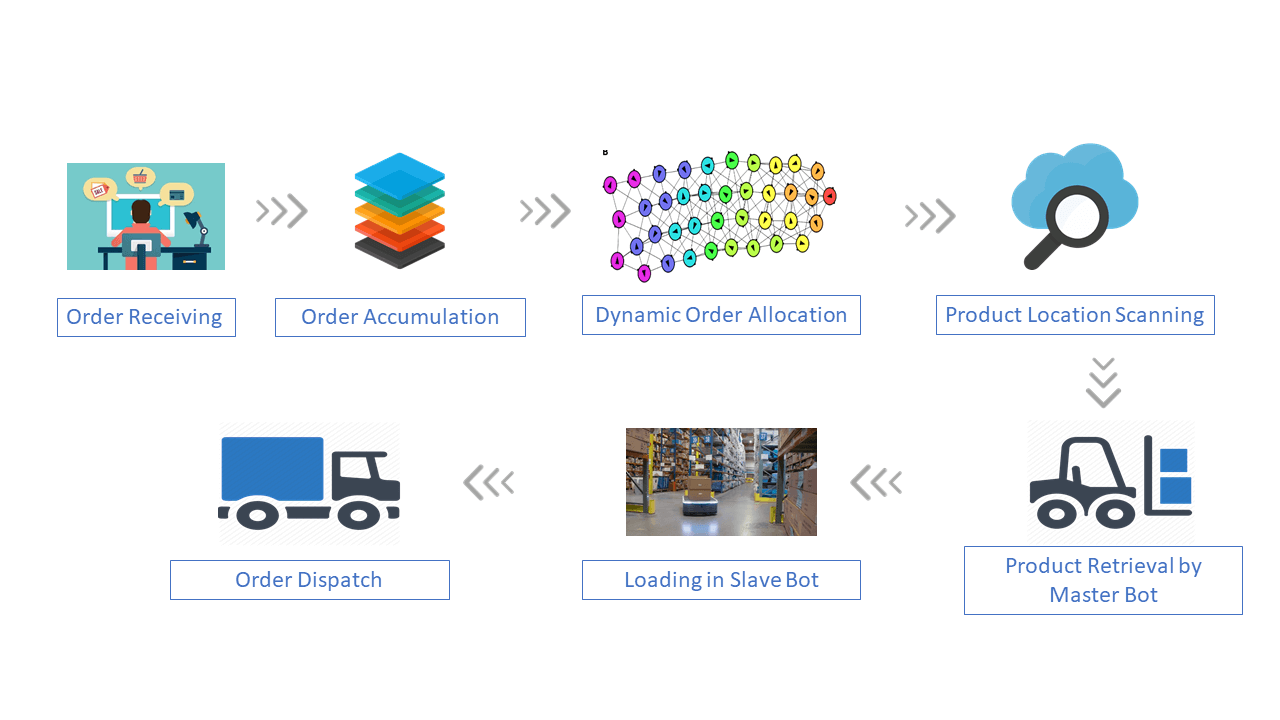 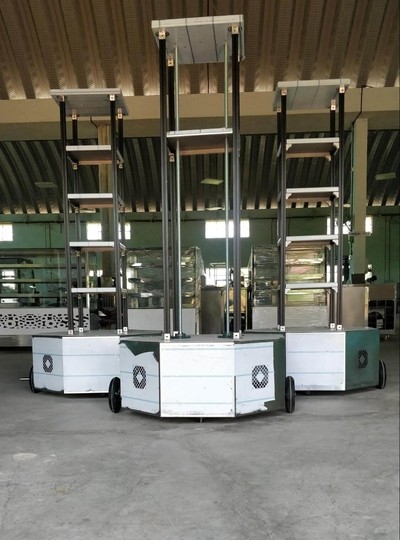 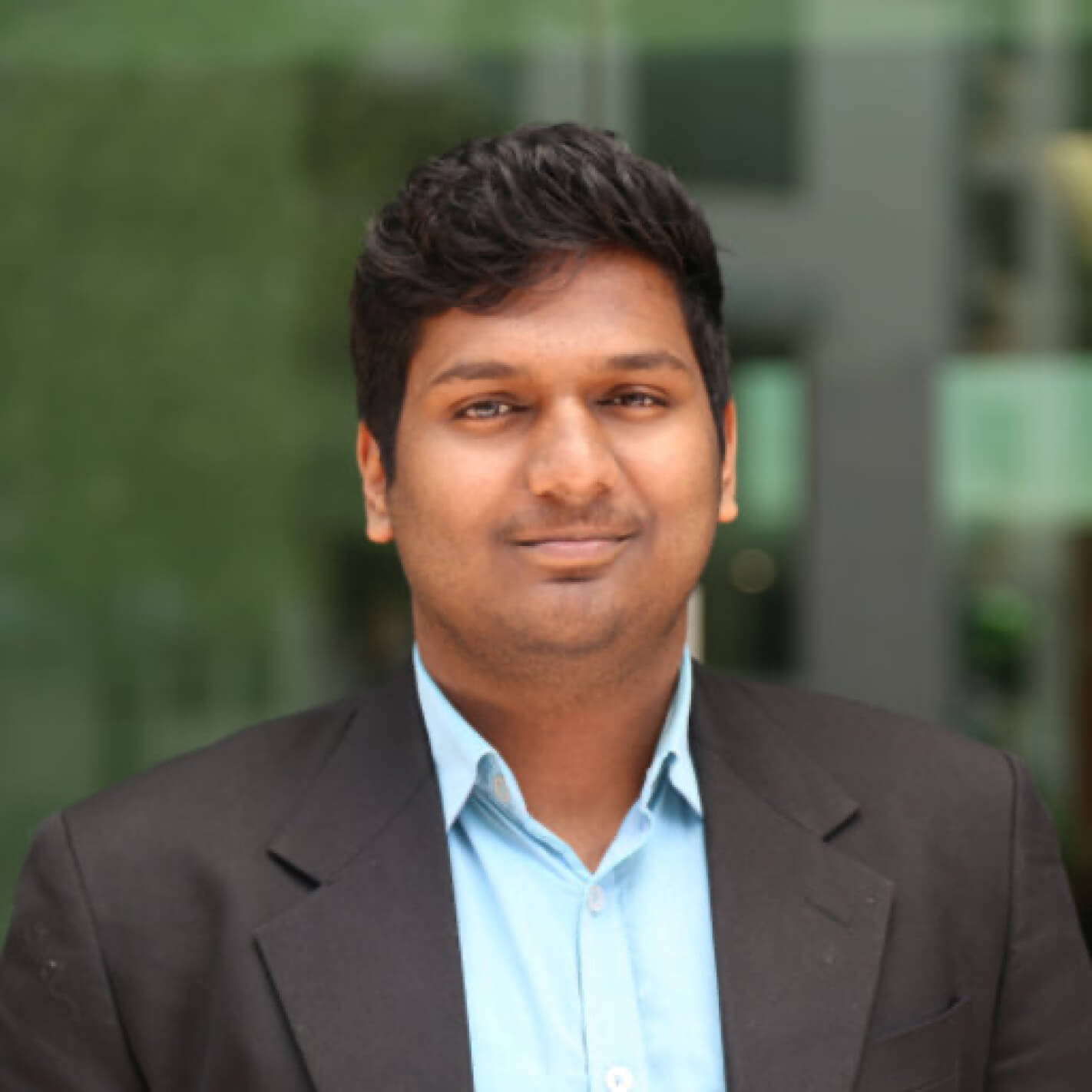 Cyril has worked on various projects and research works during the past years. (Google Scholar link) His fields of interest and expertise include Artificial Intelligence, Robotics and Embedded Systems. Cyril continues to contribute to these fields by working on various exciting projects and guiding beginners to work on their projects. For any further information, you can contact him at cyrilbabyjoe@gmail.com. cyrilbabyjoe@gmail.com/

It started off in a more hectic manner than I could expect. ... read more

It started off in a more hectic manner than I could expect. However, in the course of time, I have really enjoyed this experience in a completely different environment. I have gotten more insights in the field I aspire to study in. Overall a complete internship for people with serious aptitude and attitude. read less

“GAIP is perfectly aligned with someone's goal who wishes to experience an outburst of academic challenges while working on projec ... read more

“GAIP is perfectly aligned with someone's goal who wishes to experience an outburst of academic challenges while working on projects with the amazing support of all the organizers, faculties and teaching assistants along with exploring the city.” read less

“Combining different characters and skillset from different institutes and domains in a new country and fantastic institute, it wa ... read more

“Combining different characters and skillset from different institutes and domains in a new country and fantastic institute, it was a pleasure to be a part of this winter internship. I loved every bit of it and would cherish this forever.” read less

“An enriching and enthralling experience. The course was extensive but worth every penny. ... read more

“An enriching and enthralling experience. The course was extensive but worth every penny. I'd recommend it to anyone interested in delving into the world of AI-ML.” read less

“I personally learned quite a bit here but the 6-month project or LOR aren't as easy to get as was portrayed before. ... read more

“I personally learned quite a bit here but the 6-month project or LOR aren't as easy to get as was portrayed before. However, the faculty were quite knowledgeable and it was a great experience learning from them, and my peers.” read less

“It was a great experience for me, and far beyond my expectations. ... read more

“It was a great experience for me, and far beyond my expectations. The diversity of people from different institutions, and the impressive curriculum, gave me tremendous inspiration and insight in the subject. Through the various sessions, assessments, and discussions with NUS faculty and HPE professionals have been able to take a big step forward in developing my technical abilities and aspirations”. read less

“This Internship is the perfect balance of theory and practical application. ... read more

“This Internship is the perfect balance of theory and practical application. Coming from a beginner’s level, I felt that the instructor/professor was accommodating towards all levels of previous knowledge that a student may hold on the subject. It was truly a worthwhile experience and I hope to apply whatever I’ve learnt and further my knowledge through projects of my interest. Kudos to Team CG!” read less

“This Internship has strengthened my concepts on Artificial Intelligence and Deep learning which are the hot words of today’s t ... read more

“This Internship has strengthened my concepts on Artificial Intelligence and Deep learning which are the hot words of today’s technology and I will forever be indebted to Corporate Gurukul for providing me with great opportunities that will give me the necessary impetus and a perfect launch pad to propel my career in the desired direction.” read less

Enroll for
What is Warehouse Automation

Book Consultation for
What is Warehouse Automation

Applying for
What is Warehouse Automation